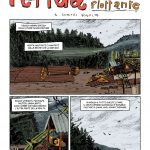 A graphic novel about the “Hanging Woman”

“Ferida” is a graphic novel that I made in one week, and it was a personal experimental project.

Ferida’s story is my interpretation of “The Guardian”‘s article about a symbol of the war in Srebrenica in eastern Bosnia. The beginning of my inspiration was the photo of “The hanging Woman” published on the newspaper’s front page on 15 July 1995. Ferida Osmanivic was a suicide victim found on a tree in Tuzla.