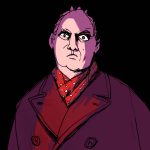 Who was Edward Alexander Crowley?

b- An occultist, writer, and mountaineer

THE RIGHT ANSWER: b

Edward Alexander Crowley or Aleister Crowley a.k.a. the Beast 666, was a British occultist, writer and mountaineer. In fact, he took part in pioneering attempts to climb both K2 and Kanchenjunga in the early 1900s. He became a prolific author of poems, novels, and occult literature.

For me, it’s hard to summarise the complex life of Aleister Crowley, but I’m interested mostly in his “Magick” (yes, with a “ck”).

Crowley claimed that in the year 1904 on 8th April in Cairo, Egypt, at noon, a voice “from the furthest corner of the room” started to dictate “The Book of the Law” which became the basis of his new religion called “Thelema”.

The voice, according to the books written by Aleister Crowley, belonged to Aiwass, a superior intelligence and a discarnate being, maybe an angel.

As stated by this non-corporeal being, humanity was approaching a new era which was the “Æon of Horus” and that the primary precept, the rule or principle, to follow would be “Do what thou wilt shall be the whole of the law.”.

Although the “Revelation” of Aiwass, the knowledge acquired, the precept, and the implemetation of his religion, Crowley died in poverty in a rooming house.

Maybe, this was his will.

Who was Éliphas Lévi?

A- An esotericist and magician

B- An illustrator and a poet

THE RIGHT ANSWER: both of them

Some believe that the universe is ruled by invisible energies, like The Force in Star Wars Saga.

In the 19th century, there were a lot of people that believed in ethereal and natural forces, which was, maybe, a consequence of the idea by Franz Anton Mesmer and his mesmerism (I’m looking forward to writing something about it). Don’t forget that spiritism took hold in the same epoch too.

One of these believers was Alfonse Luis Constant which was the real name of Éliphas Lévi, born in 1810 and died in 1875 in Paris.

He was a prolific author, illustrator, poet, and writer. Constant, aka Éliphas Lévi, in a short time became one of the most influential esoteric authors, writing and publishing a remarkable series of works on magic. He was a master of the occult mysteries and had lots of followers.

Éliphas Lévi conceived the notion of “Astral Light”, a fluid that filled every living being and every space in the Universe. As a tool, this energy could be used by the Magician for good or for evil.  In fact, according to Éliphas Lévi, it would have been the responsibility of the wise men to hide this Supreme Knowledge from the people.

But, remember! YOU, sceptic and wretched man!

Éliphas Lévi wasn’t “only a magician” he was also one of the most important esoteric writers of all time. All the modern occultists consider him one of the Great Men and the one who was able to “light the world with measured rationality fed by science and faith”!

As claimed by the authorities of the occult and some strange hooded figures, he wrote some of the cornerstones of modern occultism and esotericism. For example, books like “Dogme et rituel de la haute magie”, “Histoire de la magie”, and “La clef des grands mystères” are considered to be the founding works of occultism.

I’d love to write more about Éliphas Lévi… but I have to go. It’s late.

I’m in the middle of the night and the candle fire is out.

Also, there’s a light out of my window that’s calling me.

Who was Hippolyte Léon Denizard Rivail?

1- A writer of various manuals about pedagogy

2- The systematizer of Spiritism

THE RIGHT ANSWER:  both of them.

He was born in Lyon on 3rd October in 1804 and died in 1869. In a part of his life, Hippolyte Léon Denizard Rivail was a french pedagogue. Infact, he was a brilliant student in the Yiverton istitute founded by  Johann Heinrich Pestalozzi and once established in Paris, he founded a private school in which he used methods based on Pestalozzi’s ideas. In the mean time, he wrote a lot of books  to spread his knowledge.

But one day, he discovered the table-turning phenomena that had come from the USA. Since then, he became Allan Kardec. With this penname, he wrote the fundamentals of Spiritism. It was a strategic choice because he was able to write and publish books in the pedagogy discipline with a serious, verified and certified profile.

So, Hippolyte, a.k.a. Allan Kardec, was the codifier of Spiritism, in particular, there are 5 fundamental books which have became the basis of this doctrine. These books have been reedited and republished until 2021.

I’m wondering if Allan Kardec is watching me, in this case I would say:

“Hello there, how are you? I hope you are well. I’m very sorry. My skeptical attitude has dragged me away from you.”

And you what would you ask Allan Kardec?