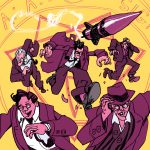 Has the “Suicide Squad” really existed?

I was looking for some juicy stories about portals and aliens when I came across an interesting name: Jack Parsons.

Some occultists claimed that Jack Parsons and L. Ron Hubbard (father of Scientology cult) started meeting with the “Babalon Working” in 1946.

It seems that together, they opened an extradimensional portal that brought “flying saucers” and aliens to our world.

Other occult arts experts claim instead that during the operations to create the “Moonchild”, they performed sex magic to summon a goddess called “Babalon”, following the ideas of Aleister Crowley.

The only certain fact is that in the 1930s, Jack Parsons was a disciple of the Ordo Templi Orientis, an occult society created by the English occultist Aleister Crowley.

Jack Parsons wasn’t only a magic enthusiast but also one of the brilliant men who contributed to creating the solid fuel for the rockets used to go into space. Like a mad scientist in the movies!

In the 1930’s he was part of the GALCIT Rocket Research Project, better known as “Suicide Squad”. They earned the nickname because of all their dangerous experiments with explosives.

Eventually, they succeeded in building the JATO Rocket, the acronym for jet-assisted take-off.

With the government’s aid, Jack Parsons and the members of the Suicide Squad founded the Jet Propulsion Laboratory.

Nowadays, JPL is a federally funded research and development center managed for NASA by Caltech (California Institute of Technology).

A question is creeping over me:
Did we go to the Moon thanks to a spell?

THE RIGHT ANSWER: A